Ever since reading this post by Guns & Ammo about the 6mm ARC caliber and it’s applications and viability in a bolt action rifle configuration, I have been interested in this new caliber from Hornady. But when I learned about the Mini action bolt action rifles that Howa makes with a bolt throw that is 12% shorter or almost an inch shorter than a normal short action, then the idea sparked that I wanted to build a mini action based 6mm ARC rifle. Both for myself for a small truck gun if you like to call it that, but also as a first centerfire rifle for both my sons to learn to shoot with and possibly hunt their first animals with.

I had not originally been interested in a Howa 1500 Mini action rifle, as I did not really like the calibers it was offered in. These were the .223 Remington, the 7.62×39 (AK47 cartridge) and the 6.5 Grendel. Although the 6.5 Grendel is a known accurate and easy to tune cartridge, it has always been somewhat under-powered for the 6.5mm sized bullets in my opinion. Now the 6mm ARC addressed this as it offered lighter bullets at greater velocities from a similarly sized case.

Since starting this project, Howa have announced that they are releasing the Howa 1500 Mini action rifles in a 6mm ARC caliber, but when I started this project, that was not the case. To also be fully honest, I always prefer having custom barrels chambered and fitted to all my actions as soon as possible in any case, as then I can have the barrel profile I like and I have found greater accuracy from custom spun barrels than factory barreled actions in my own experience.

I bought a standard Howa 1500 mini action 6.5 Grendel with the black synthetic stock. There has been talk from Howa that they will soon be selling the Howa 1500 mini action already chambered in a 6mm ARC from the factory, but we have yet to actually find one for sale or anybody that has been able to find one, and given that with my personal preference and past experience with accuracy improvement after replacing most factory barrels with custom barrels and custom chambered, I actually preferred to have it custom chambered, with a 6mm 1:8 twist Lothar Walther stainless heavy varmint barrel I already had.

It was then sent to a gunsmith where a Lothar Walther 6mm 1-8 twist heavy varmint barrel was fitted to the action and was chambered in 6mm ARC, profile cut down slightly, straight fluted to lower the weight without sacrificing rigidity. Lastly it was all Cerakoted in black to match match the action, and because the last thing you need when all dressed up in camo, stalking a buck in the bush, and you have this long shiny reflective tube sticking out above you for the animal to spot.

I then wanting to keep weight to a minimum without sacrificing rigidity, I opted to do epoxy bedding on the standard composite stock, and also epoxied the whole forend for more rigidity. This was my first personal bedding job and although very sloppy, it proved very successful and the action slides super snugly into the stock, and the stock forend does not easily torque under pressure even when using the rifle with a bipod.

At this point, the barreled action is still at the gunsmith, waiting for him to do the trigger, whereafter I will fit the custom Howa 1500 mini action picatinny rail whilst glass bedding that too, the I will start prepping the brass and doing the load development for it. But you can read more about that in the Part 2 post that I will write and publish as soon as that process gets going. 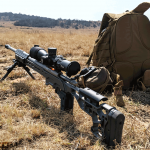 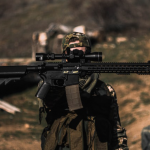 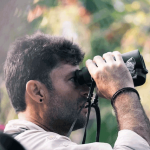