Hey, I am James Eagleman from Barbourcreek and we are going to show you The Zeus Terminus Action, which allows for a quick change. Its what we use in the shooting school. I’m going to arrange that elk really quick at a thousand yards.

So, the wind’s running pretty hard and I’m holding about 4 minutes of the wind, I’m guessing, so according to this, we’ll give it a shot.

We’re going straight to the elk and we’ll give it four minutes of wind.

(Shot fired: just a little above the target to the left)

So now what I’m going to do, with as little aggravation as possible, I’m going to loosen two side screws from the side of this terminus action.

I’m not going to pull the barrel off, because if I do that, I’ll have to take the stock off and it’s going to add to the point of impact change, and I’m not going to pull the suppressor off. So, really, all I’m going to do is break this loose and unscrew the barrel a little bit, screw it right back on and show you the difference and point of impact at a thousand yards and at 996 yards. So, standby, here we go.

I’m going to throw this in a vice, just because this has been on here for four classes.

So what I’m going to do is just snug it up. Again, I’m going to try to have as minimal impact difference as I can without taking the stock off, because, that can activate it, so let me, one second…

You know you don’t have to take them out all the way. Check out the other one. I’m chilling in my shorts today by the way because it’s about 80 degrees.

All right, here’s the Best Part

Give it a good whack and as you can see, the barrel is unscrewing. And that’s about as far as I can go at this point. You can see it wobbling because I got the stock on. I’m going to screw it right back in and here’s how I mount them, ready? Give it a snap, and then from there, I’m just going to take and tighten up the screws again. Alright, one on this side and the other side.

This is an impromptu video but at least you’ll get to see how well this works. Alright, back to the bench. Oh! Probably helps if I unscrew this right. I leave this here for my school again, and I change these barrels about every three months to get about 3 four-hundreds.

Wind has changes and wind is only two miles an hour. So, I’m going to give it a minute of wind. I probably don’t even need to give it that but let’s go and get set up on it.

Level looks good, going to have a one-minute right wing.

(Shot fired: On the target but a little to the left)

Now, that elk, I’ll show it one more time, give it a little bit more wind this time.

And as you can see, even at 999 yards I had no impact difference that I could see at 999 yards from unscrewing the barrel and then screwing it back on with the terminus Zeus action, again, 999 yards 6.5 creedmore, the first shot that I took, I didn’t give enough wind. I really should have held a minute but I held three quarter of the second but the elevation was there, so as you saw on the  film. Hey, that’s another downrange shooting tip from James at Barbourcreek Zeus Action / The Terminus Zeus Action. It’s really a great action if you want to do switch barrel or change barrels, if you’re constantly using them.

Hey, thanks for joining us.

Barbourcreek is America’s Premier Lounge Hunting School. We train on full size animal targets out to 1000 yards. With our world-renowned long-range instructor and a heated and air-conditioned shoot house, we are able to train all year around. We provide luxurious sleeping accommodations and full course meals for our clients. We’ll give you the confidence to make that once in a lifetime shot. 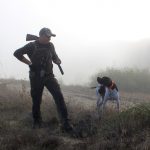 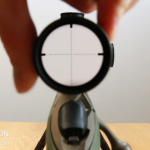 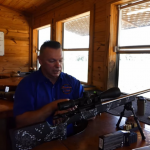